BOSTON – Aynur Dogan, one of the most famous Kurdish female singers, targets the international music market after moving to Europe from Turkey.

Dogan, who lives in The Netherlands, received “Master of Mediterranean Music Award 2017″ from Berklee College of Music, a worldwide renowned American music school in Boston, on April 16. The award was interpreted as a sign of Dogan’s crucial step to the international music community.

Answering VOA Kurdish editor Mutlu Çiviroğlu’s questions on a one-one video interview Aynur Doğan told how she sees the award and the future plans of her music career: 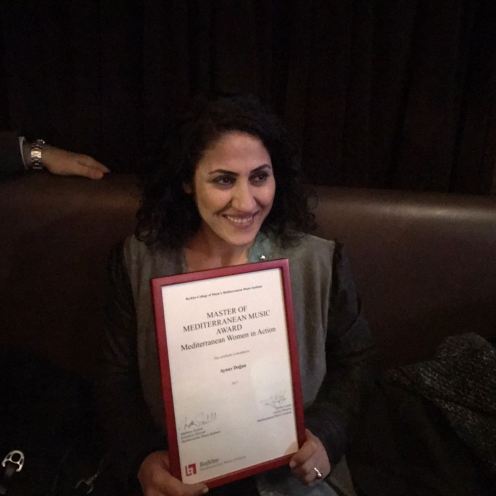 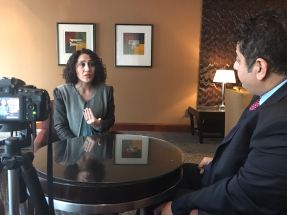 This is your second visit to the US and first time on the West Cost. You were caught by the snow storm. How was your trip?

I came with the storm, but I guess I will bring the sun then leave, (Laughing). I am trying to stay active even though the temperature has been freezing since I have been here. Yesterday, we had a great time during my performance and the ceremony. I felt warmed up after the concert.

Before we talk about the concert, I would like to ask you about the “Master Mediterranean Music Award” that you received. How do you feel about receiving this award?

It is an amazing feeling! Of course, I received this award on behalf of the women who, despite being oppressed and facing violence, never hesitate to fight back. That is the main reason I accepted this award. It was an honor for me to receive this for my music career as well.

One of the reasons you were given this award was that you set up a great example for the new generation. What do you think about this?

This means a lot to me! In this regard, what I would like to point out is that whether spiritually or emotionally, I have a strong connection with the new generation. This is what I am mostly interested in, whether in terms of the source of my music or the way I strengthen my talent. That is how you can set up an example and a vision to those who in to music, especially those who study music. During my live performance, some of the students performed with me, and they did an excellent job.

Yes, I was going to ask that too. The members of the group who played instruments for your performance were students of the college. You haven’t had a chance for the rehearsal. Did you feel comfortable during the concert? How did you like their performance?

They all are great talents. I think they will set up a great example in the future. They were South America, Lebanon, Turkey, Palestine, Iran, Serbia and Spain. It was a pleasure to play the Kurdish songs with them.

That also made me feel with my all heart that “Yes, this is who I am”. It was totally a different experience, which feels like a spiritual journey.

Aynur Dogan is with a American – Kurdish fun of her after her performance at Berklee College.

Aynur Dogan is with one of her American-Kurdish fans Naren Terra Briar, who is from Texas and studying Political Science in Boston. Briar’s family is originally from Halabja, a Kurdish city located in Iraqi Kurdistan and was gassed by Saddam Hussein in March 16, 1988. After listening Dogan’s ceremony speech about the remembrance of  Halabja massacre on the anniversary of the major attack, Briar, despite the freezing weather at that night, waited outside for a long time with an African-American schoolmate on the back door of the Berklee Performance Center, and then introduced herself to the Kurdish superstar, which was a very emotional moment for Aynur Dogan as well as Narin herself.

“I grew up with the voice of the Kurdish women who have lamented for the children they could not raise. Day after day the lamentations have grown but not sons or daughters. Today is the anniversary of one of those days: Today is the 29th anniversary of Halabja Massacre… I dedicate this award to our women who, despite violence and oppression do not bow their heads.”

How do you feel being in the US for the second time and delivering completely different music from another part of the world? Are you planning to have another performance in the US in the future?

I would love to, but this was the only project we could organize so far. There are so many invitations from different countries. I am trying to go all of them as much as I can go.  I hope it won’t take that long to come back to the US. 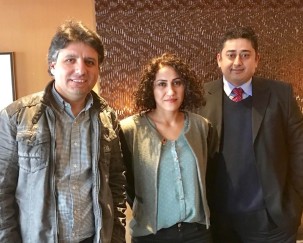 What did you like more about your performance and the ceremony? How did you feel when the Kurdish girl from Halabja (South Kurdistan) came to hug you after the ceremony and then cried?

Yes, that was a very emotional moment for me as well. I am still speechless when I remember that moment. Halabja genocide is a big trauma for all of us. When I felt her tears, and freezing hands, because she was waiting for us outside for a while in that freezing weather. It is very hard to describe what I felt in that moment.

Unfortunately, the Kurds are still facing the massacres, which recently happened in Cizre too. How can we forget it? How can we forget Roboski? These are situations that make you speechless! That is why I sometimes tell myself rather than speaking, better do something about these tragedies.

We don’t deserve such pain and sufferings. Kurdish people and especially and all peoples in Turkey do not want to endure these sufferings, but sadly they continue happening. We can’t give up! We have a big responsibility, as an artist, musician, writer or an intellectual. No matter what it takes, we should keep fighting for the peace and resist the injustice.